The push by the International Society of Weekly Newspaper Editors to encourage weekly papers to send their front pages to the Newseum paid off quickly. The site has rarely published front pages from weekly papers, but after 130 weeklies sent their fronts to the Newseum on Thursday, the site agreed to change "its policy to include weeklies in its Today’s Front Pages exhibit," Barbara Selvin reports for The Poynter Institute. Now, any newspaper can email frontpages@newseum.org for instructions on how to participate. 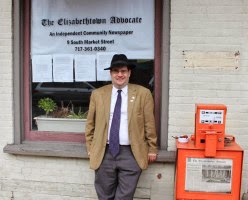 "The Newseum’s written policy limited participation to daily newspapers, a restriction that has long irked weeklies’ editors and publishers. The U.S. has approximately 1,380 daily and 6,000 weekly newspapers," Selvin writes. Dan Robrish, right, who started The Elizabethtown (Pa.) Advocate in 2010, told her, "The Newseum is supposed to be a museum about news, not about metropolitan news, not about daily news specifically. It seems like a ridiculous decision to make."

Selvin adds, "Especially, perhaps, since the Newseum had allowed newspapers that reduced their print publication schedules to three days a week to continue contributing to the exhibit." By industry convention, papers with a such a schedule have long been classified as weeklies.

Jonathan Thompson, the Newseum’s senior manager of media relations, told Selvin, “When people get together like this and feel strongly about a specific issue, and mobilize and make specific arguments, it does have an impact."

Chad Stebbins of Missouri Southern State University in Joplin, executive director of the weekly newspaper society, "said the larger issue is respect for the passion and energy that community journalists bring to their work," Selvin writes. He told her, “We have forced them to at least start considering weeklies as real, legitimate newspapers that should stand aside their daily counterparts." (Read more)
Written by Tim Mandell Posted at 4/18/2014 10:48:00 AM