"Clay County, in dead last, might as well be in a different country," Annie Lowrey writes. "The median household income there is barely above the poverty line, at $22,296, and is just over half the nationwide median. Only 7.4 percent of the population has a bachelor’s degree or higher. The unemployment rate is 12.7 percent. The disability rate is nearly as high, at 11.7 percent. (Nationwide, that figure is 1.3 percent.) Life expectancy is six years shorter than average. Perhaps related, nearly half of Clay County is obese." 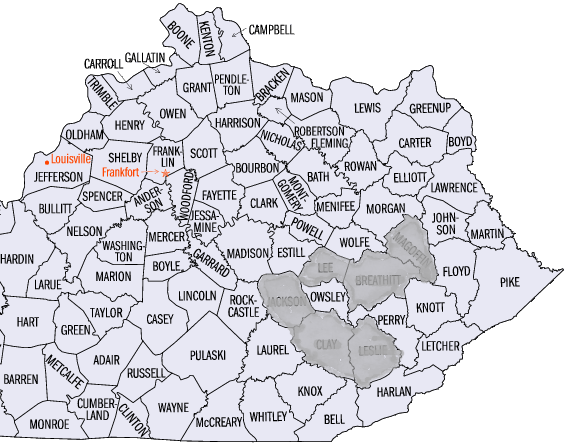 Also on the list from Kentucky are Breathitt, Jackson, Lee, Leslie and Magoffin counties. The article did not name the other four worst counties. Lowrey continues, "It’s coal country, but perhaps in name only. In the first quarter of this year, just 54 people were employed in coal mining in Clay County, a precipitous drop from its coal-production peak in 1980. That year, about 2.5 million tons of coal were taken out of the ground in Clay; this year, the county has produced a fraction of that — just over 38,000 tons."

"The public debate about the haves and the have-nots tends to focus on the 1 percent, especially on the astonishing, breakaway wealth in cities like New York, San Francisco and Washington and the great disparities contained therein," Lowrey writes. "But what has happened in the smudge of the country between New Orleans and Pittsburgh — the Deep South and Appalachia — is in many ways as remarkable as what has happened in affluent cities. In some places, decades of growth have failed to raise incomes, and of late, poverty has become more concentrated not in urban areas but in rural ones."

James P. Ziliak, the director of the Center for Poverty Research at the University of Kentucky, told Lowrey, “One of the challenges that faces Eastern Kentucky is the remoteness of the area. It’s difficult to get to a lot of places. The communities are small, and they’re spread apart, so you lose that synergy that you want to spark development a lot of times. . . . My view is that firms will never locate into a community with an unskilled labor force, unless the only labor they need is unskilled. And there has been a historic lack of investment in human capital in these areas.” (Read more)

Deb Markley of the Wealth Creation and Rural Livelihoods group created by the Ford Foundation writes that the analysis "paints a pretty bleak picture but also seems to miss some promising trends, including the kinds of work many in this community are doing. From my own organization's perspective, it's distressing to see no mention of entrepreneurship as a strategy for rural places."
Written by Tim Mandell Posted at 6/26/2014 11:51:00 AM