More than 1,100 miners told their black-lung claims may been wrongly denied; Senate panel has hearing

The U.S. Department of Labor had told more than 1,100 coal miners that their compensation for black-lung disease may have been wrongly denied, Chris Hamby reports for The Center for Public Integrity. Dr. Paul S. Wheeler, the head of the unit at Johns Hopkins Medical Institutions who interprets X-rays in black-lung claims, failed to find a single case of severe black lung in more than 1,500 cases decided since 2000 in which he offered an opinion. In June officials were ordered to stop using Wheeler's opinions. 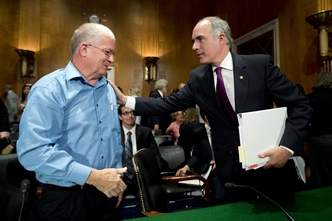 "He spotlighted the case of Gary Fox, a longtime coal miner from Bluefield who died in 2009," Lawrence writes. Cline said the West Virginia Black Lung Review Board certified he suffered from black lung, but Elk Run Coal Co. appealed the case. Two pathologists hired as expert witnesses by Elk Run concluded Fox had black lung, "but the evidence in their report was suppressed." (Read more)

Robert Bailey of Princeton, W.Va., who worked for more than 36 years in coal mines, told the committee "it took him about four years to win black lung benefits, but that he’s still trying to get insurance to cover the cost of a lung transplant," reports The Associated Press. "There is currently a backlog of roughly 3,000 black lung cases pending before the Labor Department’s Office of Administrative Law Judges, according to the Labor Department." (Read more)

Bailey "asked Congress to help streamline the process of obtaining black lung benefits, and the Obama administration insisted it is taking steps to fix longstanding abuses," Ken Ward reports for The Charleston Gazette. Bailey told the committee, “Living with black lung is thinking about every breath you take. Policies and laws need to be changed to give hope and life to those who don’t have time for stall tactics.” (Read more)
Written by Tim Mandell Posted at 7/23/2014 01:18:00 PM