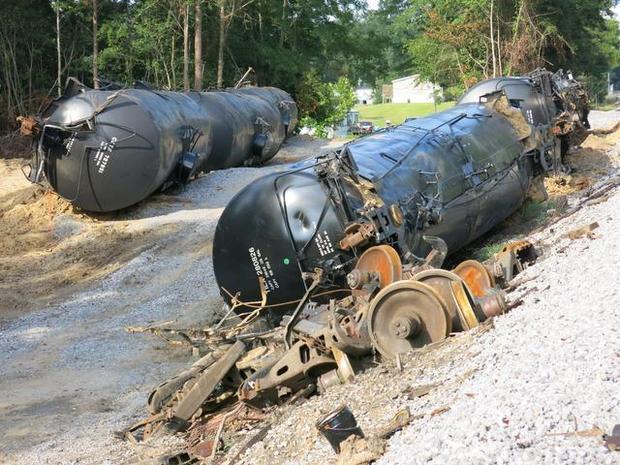 "The U.S. Department of Transportation proposed on Wednesday a two-year phase-out of older railroad tank cars used to transport crude oil, which have been involved in several serious derailments over the past year," Curtis Tate reports for McClatchy Newspapers. "DOT will seek the phase-out or retrofit of older model DOT-111 tank cars from crude oil and ethanol service. They’ve long been known to be vulnerable to failure in derailments." (Tate photo: More than a month after a derailment in Buhl, Ala., tank cars carrying fuel oil remain in the vicinity of residences)

The move comes one year after 47 died people from the derailment in Quebec of a train running from North Dakota to Maine. In the U.S. in 2013 more oil was spilled than in the previous 37 years combined. The surge in accidents has led to new safety rules in Canada and a demand for new rules and upgrades in the U.S. as well as more readily available information on what trains are hauling.

The proposal also limits the maximum speed to 40 mph "in all areas for trains that are operating with older tank cars and for urban areas with more than 100,000 residents," Tate writes. "Trains with tank cars that meet the new requirements would be permitted to travel at 50 mph outside urban areas." Railroads would also be required to notify state and local emergency officials about shipments containing 1 million gallons or more of Bakken crude oil.

The public comment period has been limited to 60 days, most likely in an attempt "to set off a flurry of efforts in Washington by oil producers, rail companies, refiners and tank car manufacturers, as well as community and environmental groups," Tate writes.
Written by Tim Mandell Posted at 7/24/2014 04:49:00 PM