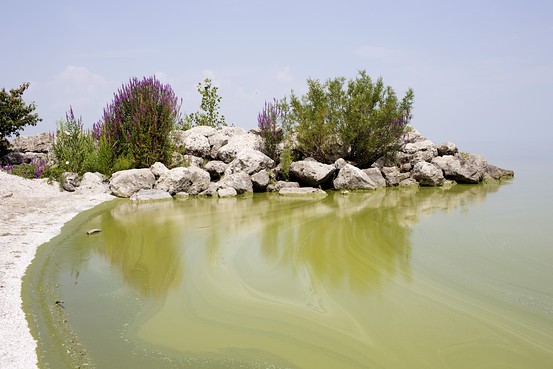 Concern about tainted drinking water in Lake Erie caused by algae blooms, which are made toxic from farm runoff, has led regulators to require Ohio farmers to acquire a fertilizer license, Mark Peters and Matthew Dolan report for The Wall Street Journal. The licenses, which will become mandatory in 2017 and will require farmers to take a one-day class, "are aimed at cutting fertilizer use by showing farmers how they can apply less nutrients without hurting crop yields. The law also allows regulators to revoke such certifications if problems are found on a farm." (Getty Images: Algae in Lake Erie)

"A big part of Toledo's problem comes from the Maumee River, which drains a broad swath of agricultural land, feeding the bloom on Toledo's end of the lake," Peters and Dolan write. "Other major cities near the Great Lakes such as Chicago and Detroit haven't experienced similar restrictions, but some are voicing new concerns about the potential threats to their drinking-water supplies."

Adam Sharp, vice president of public policy for the Ohio Farm Bureau Federation, told the Journal, "This is a big deal. We recognize it, and we're going to resolve it." But environmentalists say the rule doesn't go far enough. Howard Learner, president of the Environmental Law and Policy Center, a Midwest advocacy group, told the Journal, "This isn't a matter of farmers fine-tuning what they're doing. This requires a substantial rethinking of how nitrogen and phosphorus is used in the agriculture sector."

Across the U.S. "progress has been made when it comes to better fertilizer management, according to the Environmental Defense Fund," Peters and Dolan write. "Farmers and retailers have increased demand for nutrient-efficient products and helped to reduce fertilizer loss by an average of 25 percent on half a million acres in six states, including Ohio, while also keeping up or increasing crop yields, the group said."

"Still, the response by farmers and regulators, not just in Ohio, but in farm states across the Midwest, has drawn criticism from other environmental groups that don't see progress," the Journal writes. "They are fighting in court to force the U.S. Environmental Protection Agency to set limits on nutrient levels for lakes, streams and rivers." (Read more)
Written by Tim Mandell Posted at 8/06/2014 03:59:00 PM