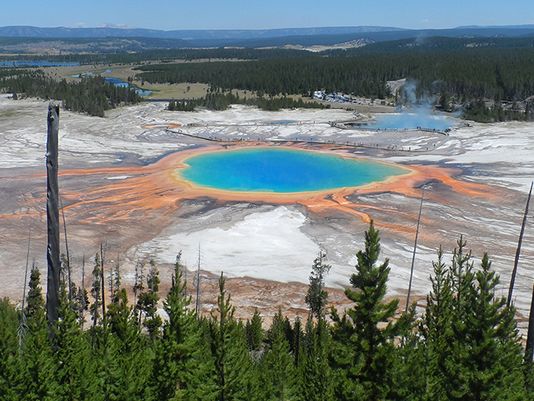 While more people are using drones, including farmers and journalism programs, rural journalists, the energy industry and law enforcement, concern has grown about irresponsible or inexperienced operators flying drones with no regard for any laws or regulations, which has led to a few near misses between drones and planes. Those concerns were brought to light on Wednesday when a tourist "at Yellowstone National Park crashed a camera-equipped drone into its largest hot spring, possibly damaging the prized geothermal feature, a park official said on Wednesday," Laura Zuckerman reports for Reuters. (Your Take photo by Todd Atherly: Yellowstone's Grand Prismatic hot spring)

"The incident follows the crash earlier this summer of a drone into a marina at Yellowstone Lake and a string of radio-controlled aircraft violations at Grand Teton National Park in Wyoming," Zuckerman writes. "The National Park Service in June announced a ban on so-called unmanned aerial vehicles, but officials say premier national parks in the U.S. West are reporting a sharp rise in the number of drones buzzing bison and boaters." The park is trying to determine how to extract the drone from the hot spring, which is 370 feet in diameter and 121 feet deep, without damaging the site.

One of the problems is that the FAA has yet to announce any regulations for drone use and is expected to miss a September 2015 deadline set by Congress "because of technical and regulatory obstacles that are unlikely to be resolved anytime soon," Craig Whitlock reports for The Washington Post. Without any regulations, and with a federal judge in March dismissing an FAA fine against a drone user, commercial drone use appears to be legal below 400 feet. But regulating any drone use has been difficult for the FAA to accomplish.
Written by Tim Mandell Posted at 8/08/2014 01:38:00 PM