The new face of rural poverty is directly related to the successes and failures of the towns where people live, Lydia DePillis reports for The Washington Post. "That’s the story of the new rural poverty in America: If your hometown went south, you probably did with it, unless you managed to get out and had the wherewithal to not come back." 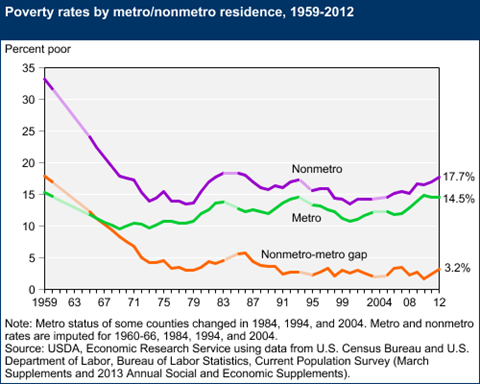 The poverty of Las Animas, Colo., where jobs are few and far between and farming jobs have been replaced by tractor tines, "isn’t the poverty of Appalachia or the Mississippi Delta or an Indian reservation, entrenched and intergenerational, enforced by age-old hierarchies of race and class," DePillis writes. "It’s the kind of poverty that can affect anyone who finds themselves in a place when the native industries disappear, as they have in Southeast Colorado and other rural areas across America." (USDA graphic)

Tracey Farrigan, an economist with the U.S. Department of Agriculture who is studying how rural poverty has spread, told DePillis, “I think it’s more of a place-based poverty than it is demographic. People are moving to areas where they can afford to live, which are areas with less support for them. It’s kind of a cycle. So the places are poor, and the people are poor.”

The history of Las Animas' plunge to poverty goes back 30 years, DePillis writes. "The sugar beet factory closed in the 1980s, along with other processing facilities; agricultural consolidation meant small farmers would have to drive hours to sell their livestock and crops. Other employment centers quickly followed suit. In 2001, the century-old Fort Lyon Veterans Administration Hospital seven miles away shut down, and hundreds of well-paid medical jobs disappeared. A bus factory a few miles to the east of Las Animas and a pickle factory to the west went dark in 2005. In 2011, the state closed the prison that it had started on the hospital grounds and last year replaced it with a program for homeless addicts that employs a fraction of the staff."

Still, despite few jobs, many of the residents who remain have no plans of leaving, DePillis writes. City councilman Frank Schmeiser told DePillis, “You could ask ten people what they think of the area, and nine of them would say they can’t stand it, but they never leave. It seems like a lot of people are just beaten down, almost depressive. We could get jobs, and jobs that we wanted, pretty easily elsewhere. We stay here because we’re insane, I guess." (Read more)
Written by Tim Mandell Posted at 8/07/2014 02:09:00 PM