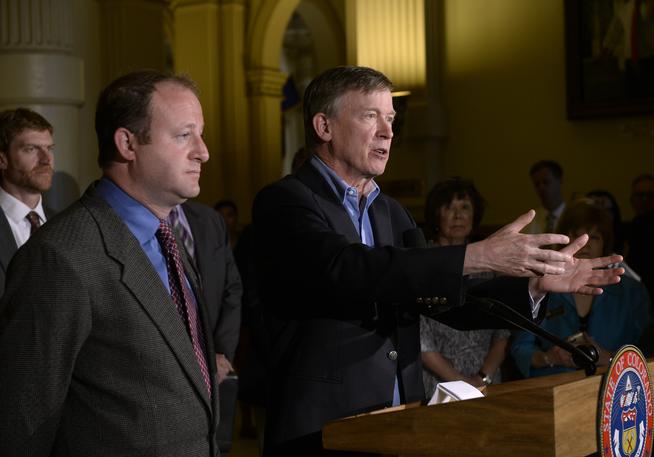 It looks like Colorado residents won't get to vote on whether or not to ban fracking in their towns, Mark Jaffe reports for The Denver Post. Democratic Gov. John Hickenlooper, who has said he will do whatever it takes to beat anti-fracking initiatives, "on Monday unveiled a delicately balanced compromise on local control of oil and gas drilling that will remove all the initiatives on the issue from the November ballot." (Post photo by Kathryn Scott Osler: Gov. John Hickenlooper, right, and U.S. Rep. Jared Polis announce the compromise)

"U.S. Rep Jared Polis (D-Boulder) agreed to drop two measures he supported aimed at requiring drilling rigs to be set back 2,000 feet from homes and bolstering local control by adding an environmental bill of rights to the state constitution," Jaffe writes. "Backers of two industry-supported measures—Initiative 121, which would have withheld state oil and gas revenue from communities banning drilling, and Initiative 137, which required a fiscal impact note for all initiatives—said they, too, would pull back." Estimates show that $10 million had already been spent on initiatives, with more than $20 million expected to be spent by the election, with most of it coming from the oil and gas industry.br

Hickenlooper said he will create an 18-member task force, which will make recommendations to the legislature—by a two-thirds vote on ways "to minimize land-use conflicts that can occur when siting oil and gas facilities near homes, schools, businesses and recreational facilities," Jaffe writes. "Under the compromise, the Colorado Oil and Gas Conservation Commission will also drop its lawsuit against the city of Longmont over its oil and gas ordinance."