The rural job market is making a comeback. The number of jobs in June in non-metro and micro counties increased by more than 150,000 since June 2013, Bill Bishop reports for the Daily Yonder. The addition of jobs caused the unemployment rate to drop in non-metro counties from 7.9 percent in June 2014 to 6.6 percent in June 2013 and in micro counties from 7.8 percent to 6.4 percent. Another reason for the lower unemployment rate could be that more people are leaving rural areas or not looking for jobs, with "176,000 fewer people in the rural workforce this June compared to June of 2013." (Yonder map shows were jobs were gained and lost. For an interactive county-by-county version click here) 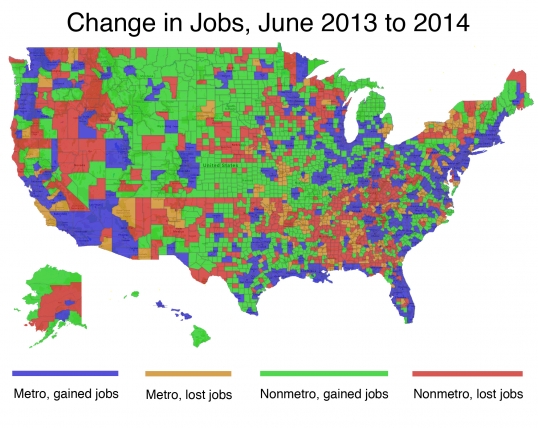 While the news is fairly good for rural America, metro areas continue to gain jobs at a faster rate, gaining more than two million jobs during the past year, with the pace of job growth in urban areas twice that of rural areas, Bishop writes. Metro areas also have a lower unemployment rate, at 6.3 percent. (Read more)
Written by Tim Mandell Posted at 8/06/2014 04:00:00 PM