A Coca-Cola-backed study says the cure to obesity is to stop worrying about cutting calories and spend more time exercising, Anahad O'Connor reports for The New York Times. It's not surprising that the company would preach this method, considering a 12 ounce can of Coke contains 140 calories and 39 grams of sugar. 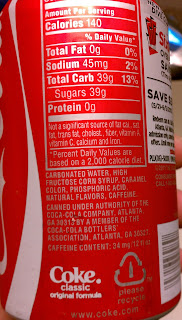 Americans consuming large quantities of soda has been partially to blame for at least 30 percent of adults in 18 states—many of them rural—being obese. Cutting soda has been one way many Americans have tried to lose weight, and "consumption of full-calorie sodas by the average American" has dropped by 25 percent in the past two decades, O'Connor writes.

To help spread their new message of how to live a healthy lifestyle, Coca-Cola "has provided financial and logistical support to a new nonprofit organization called the Global Energy Balance Network, which promotes the argument that weight-conscious Americans are overly fixated on how much they eat and drink while not paying enough attention to exercise," O'Connor writes. "Leaders of the Global Energy Balance Network disclosed that Coke had donated $1.5 million last year to start the organization."

"Since 2008, the company has also provided close to $4 million in funding for various projects to two of the organization’s founding members: Dr. Blair, a professor at the University of South Carolina whose research over the past 25 years, has formed much of the basis of federal guidelines on physical activity, and Gregory A. Hand, dean of the West Virginia University School of Public Health," O'Connor writes.

That contradicts everything health experts are saying, O'Connor writes. They "say this message is misleading and part of an effort by Coke to deflect criticism about the role sugary drinks have played in the spread of obesity and Type 2 diabetes. They contend that the company is using the new group to convince the public that physical activity can offset a bad diet despite evidence that exercise has only minimal impact on weight compared with what people consume." (Read more)
Written by Tim Mandell Posted at 8/10/2015 04:42:00 PM