More than 1.8 million Alabama residents—including more than 500,000 children—live in communities without grocery stores, says a report by The Food Trust. The report, which recommends the creation of a statewide healthy food financing program to incentivize healthy food retail development in communities of need, says food deserts have led Alabama to have the nation's highest rate of diabetes among adults and the third highest rate of obesity among children. Over the past 30 years, Alabama's obesity rate has more than doubled in children to 35 percent and quadrupled in adults to more than 32 percent. 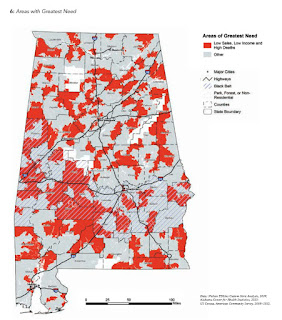 "The lack of access to affordable and nutritious food has a negative impact on the health of children and families in both rural and urban areas of Alabama," the report says. "A growing body of research indicates that people who live in communities without a supermarket suffer from disproportionately high rates of obesity, diabetes and other diet-related health problems. In contrast, when people live in a community with a supermarket, they tend to eat more servings of fruits and vegetables and are more likely to maintain a healthy weight." (Food Trust map: Areas with the greatest need)

Jada Shaffer, campaign manager for the non-profit VOICES for Alabama Children, said a lack of grocery stores means residents in rural and underserved areas have to travel 10 to 20 miles to a purchase healthy food or rely on less healthy options at nearby gas stations, convenient stores and fast food restaurants, Anne Kim reports for Washington Monthly. To try to improve the situation, legislators recently approved "a revolving loan fund—the 'Healthy Food Financing Fund'—to help finance the construction or expansion of grocery stores in currently underserved neighborhoods."
Written by Tim Mandell Posted at 8/10/2015 04:42:00 PM