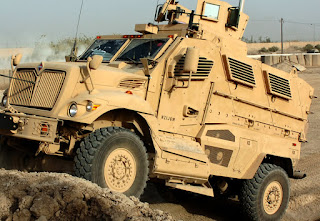 It's not uncommon for small town police department to stock up on seemingly unnecessary military gear through a U.S. Department of Defense program that allows the transfer of military property that is no longer needed, with few restrictions placed on the use of the items. That has raised concern in some areas, especially after last year's riots in Ferguson were met with military-style resistance from local police. (Department of Defense photo: Police departments and sheriff's offices are requesting vehicles like this to combat local crime)

Advocates justify the heavy artillery as providing safety to the community during potential threats such as hostage situations, rescue missions and heavy-duty shootouts, Molly Redden reports for Mother Jones. To see if this is true, "Mother Jones obtained more than 450 local requests, filed over two years, for what may be the most iconic piece of equipment in the debate over militarizing local police: the mine resistant ambush protected vehicle, or MRAP. And an analysis of these documents reveals that in justifying their requests, very few sheriffs and police chiefs cite active shooters, hostage situations or terrorism, as police advocates do in public."

"Instead, the single most common reason agencies requested a mine-resistant vehicle was to combat drugs," Redden writes. "Fully a quarter of the 465 requests projected using the vehicles for drug enforcement. Almost half of all departments indicated that they sit within a region designated by the federal government as a High Intensity Drug Trafficking Area. (Nationwide, only 17 percent of counties are HIDTAs.) One out of six departments were prepared to use the vehicles to serve search or arrest warrants on individuals who had yet to be convicted of a crime. And more than half of the departments indicated they were willing to deploy armored vehicles in a broad range of Special Weapons and Tactics (SWAT) raids."

"By contrast, out of the total 465 requests, only 8 percent mention the possibility of a barricaded gunman," Redden writes. "For hostage situations, the number is 7 percent, for active shooters, 6 percent. Only a handful mentioned downed officers or the possibility of terrorism."

"The requests flowed to a massive Pentagon program—known as the 1033 program—that has given communities across the country a total of $5.6 billion in combat equipment left over from the wars in Iraq and Afghanistan, including, a spokeswoman for the Pentagon said, 625 MRAPs. A 2014 NPR analysis found that the Pentagon has also doled out 80,000 assault rifles, 200 grenade launchers and 12,000 bayonets. In 2012, the program began making MRAPs available," Redden writes. "The vehicles weigh around 14 tons and feature armored hulls and tiny, blast-proof windows." (Read more)
Written by Tim Mandell Posted at 8/12/2015 12:56:00 PM