EPA knew of dangers at Colorado mine that spilled 3 millions gallons of toxic water, document says 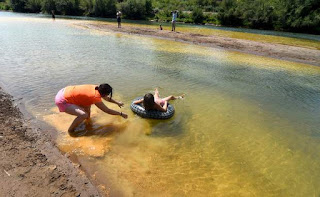 The Environmental Protection Agency "knew about the risks of a polluted water blowout from its work at Colorado's shuttered Gold King mine, according to documents released by the agency Friday," Manuel Quiñones reports for Greenwire. On Aug. 6 EPA accidentally released 3 million gallons of toxic wastewater from an abandoned mine at Silverton, Colo., into the Animas River, yellowing it all the way to New Mexico. (Durango Herald photo by Steve Lewis: EPA officials on Sunday said contaminated water levels in the Animas are trending toward pre-spill conditions)

In a June 2014 document, EPA contractor Environmental Restoration LLC, which calls itself the largest provider of emergency response services to EPA, "said the mine's workings had been inaccessible since the mid-1990s, when its portal collapsed. The company said water likely built up," Quiñones writes. The document states: "Conditions may exist that could result in a blow-out of the blockages and cause a release of large volumes of contaminated mine waters and sediment from inside the mine, which contain concentrated heavy metals."

"Another document by Environmental Restoration outlines general measures in case of a spill, including alerting communities that rely on potentially affected drinking water," Quiñones writes. That has caused concern among officials, who are unsure whether or not EPA followed the guidelines. Colorado Attorney General Cynthia Coffman, a Republican, told Quiñones, "The plan indicates there was an understanding of what might happen and what the potential consequences were. We don't know whether they followed the plan. I want to give the EPA the benefit of the doubt here. I really want to do that. It's getting harder." (Read more)
Written by Tim Mandell Posted at 8/25/2015 01:19:00 PM