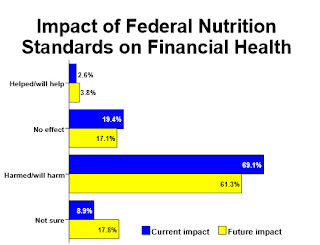 Federally mandated healthier school lunch rules are proving costly for the majority of schools, says a survey released on Tuesday by the School Nutrition Association. SNA, which supports new school lunch rules, in April requested that Congress increase federal reimbursement for each lunch and breakfast served in the program, asking for an increase of 35 cents for each meal served—the current amount is just over $3 per meal—and they also requested more flexibility on a few of the new rules. SNA repeated its need for more funding in the report. (SNA graphic)

The SNA report states: "Looking forward two years shows a nearly identical pattern: a majority (61.3 percent) expect the federal standards will continue to harm their program’s overall financial health; fewer than 4 percent feel there will be a benefit to their program’s financial health. This response pattern remains consistent across most segments."

Jean Ronnei, SNA president, said in a news release "that to keep school nutrition programs 'financially sustainable for the children they serve,' Congress needs to 'provide more funding and reasonable flexibility under the most stringent rules,'" Spencer Chase reports for Agri-Pulse. Ronne wrote: “School nutrition standards have resulted in many positive changes, but we cannot ignore the repercussions, the financial impact of these rules threatens school meal programs and their efforts to better serve students."

SNA said "Districts are responding to the financial strain by reducing staff, limiting menu variety, holding off on equipment purchases and even dipping into reserves," Chase writes. "The group cited U.S. Department of Agriculture data that estimates states and school districts will have to absorb $1.22 billion in new food, labor and administrative costs in FY 2015."

The group says that "Despite any financial struggles associated with meeting the new standards, almost 99 percent of school districts have implemented the plan or plan to implement 'at least one of seven listed initiatives to promote healthier choices to students,'" Chase writes. "However, 58 percent of survey respondents indicated that participation in school lunch programs is down, and 93 percent of those respondents cited 'decreased student acceptance of meals' as a contributing factor for the decline." (Read more)
Written by Tim Mandell Posted at 8/26/2015 10:11:00 AM