Where do baby carrots come from? Many consumers clueless about food supplies

For those people who see baby carrots in the store and imagine a farmer planting rows of tiny orange sticks that turn into tiny orange carrots, think again. Despite making up 70 percent of all carrot sales, baby carrots are "milled, sculpted from the rough, soiled, mangled things we call carrots, and they serve as an example, though perhaps not a terribly grave one, of how disconnected we have all become from the production of our food," Roberto Ferdman reports for The Washington Post.

David Just, a professor of behavioral economics at Cornell University who studies consumer food choices, told Ferdman, "The majority of consumers have no clue what they’re eating or how it’s produced. There are so many people who honestly believe there are baby carrot farmers out there who grow these baby carrots that pop out of the ground and are perfectly convenient and smooth." (Post graphic) 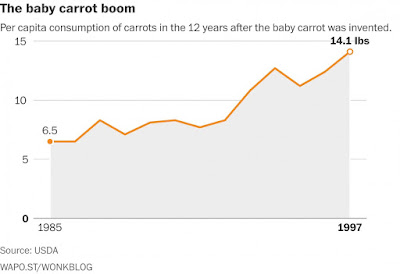 Baby carrots were invented by Mike Yurosek, a carrot farmer from California, Ferdman writes. "In the early 1980s, the carrot business was stagnant and wasteful. Growing seasons were long, and more than half of what farmers grew was ugly and unfit for grocery shelves. But in 1986, Yurosek, itching for a way to make use of all the misshapen carrots, tried something new. Instead of tossing them out, he carved them into something more palatable."

"At first, Yurosek used a potato peeler, which didn't quite work because the process was too laborious," Ferdman writes. "But then he bought an industrial green-bean cutter. The machine cut the carrots into uniform 2-inch pieces, the standard baby carrot size that persists today. When Mike Yurosek & Sons, Yurosek's now-defunct California company, delivered his next batch to Vons, a local grocery chain, he included a bag of the new creation. He suspected he was on to something but hardly anticipated such an enthusiastic response."

The rest, as they say, its history, with carrot sales in 1987 jumping by almost 30 percent, Ferdman writes. "By 1997, the average American was eating roughly 14 pounds of carrots per year, 117 percent more than a decade earlier. The baby carrot doubled carrot consumption." (Read more)
Written by Tim Mandell Posted at 1/15/2016 01:40:00 PM