In Oct., only 1/3 of eligible rural residents were on Obamacare in states using federal exchange

Rural residents have shown little interest in signing up for Obamacare in states using the federal health insurance exchange, according to analysis from the Rural Policy Research Institute, based on data through October 2015, just before the current enrollment period opened. 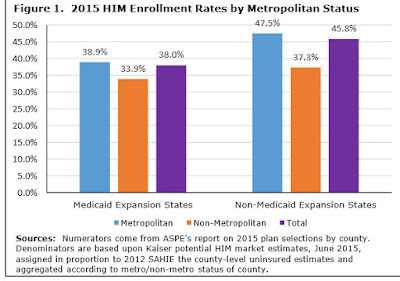 Some residents are failing to sign up because of confusion about the Patient Protection and Affordable Care Act, said Tony Logan, the U.S. Department of Agriculture's state director for Rural Development. Logan "said the state is trying to get health care information into rural areas is by educating people on the ease of access to signing up, as well as improved benefits from the 81 plans available," Craig Shoup reports for The News Messenger in northern Ohio.

The federal tax penalty for not having coverage in 2016 is higher: 2.5 percent of income, or $695, whichever is greater. Obamacare advocates hope that will encourage more enrollment.
Written by Tim Mandell Posted at 1/12/2016 01:45:00 PM