Sexual assault victims in Minnesota's rural and underserved populations have limited resources and often receive less care than similar victims in urban areas, says a report by the Minnesota Coalition Against Sexual Assault (MCASA). The study consisted of 139 respondents to a survey sent to health professionals who treat sexual assault victims. Only 42 percent of respondents said they feel there is an appropriate medical forensic response to victims from underserved populations in their area, 21 percent responded sometimes and 17 percent said they were unsure. 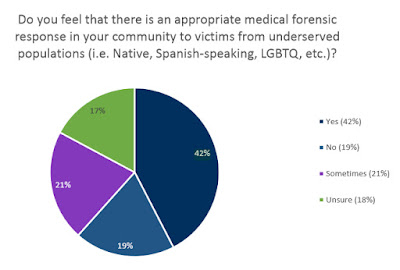 "Lack of a culturally responsive and appropriate approach creates additional barriers, injustices, and potential re-traumatization for victims from underserved populations," states the report. The main problem is not enough trained medical professionals in the area, said respondents. The current atmosphere also creates barriers, such as a lack of non-English speaking health professionals. Another problem in underserved areas is a lack of resources, which forces health professionals to send patients to other facilities. Overall, 52 percent of respondents estimated that between 90 to 100 percent of patients told to go to a different facility for their exam do not got, mainly because of transportation limits or higher costs. When patients are told they can be treated at a facility they often face long wait times.

While treatment is good in urban areas, "in most of rural Minnesota, she said, medical professionals lack training to administer physical sexual assault tests and help victims obtain a variety of types of help," Don Davis reports for the West Central Tribune in Willmar, Minn. "Kasey Baker of Willmar-based Safe Avenues said some rural hospitals without personnel trained in sexual assault cases may send victims to nearby hospitals, with large ambulance bills being sent to the victims." Baker told Davis, “The reality is that the current way in which exams are conducted in Minnesota can and have retraumatized victims.”
Written by Tim Mandell Posted at 2/12/2016 01:09:00 PM