"James Van Nostrand, director of the Center for Energy and Sustainable Development at the West Virginia University College of Law, noted that other factors are playing major roles in the coal downturn that has cost the industry a significant chunk of its market share and thousands of West Virginia miners their jobs," Ward writes. "Among those factors: plentiful and low-priced natural gas resources, decreasing costs of renewable energy sources like solar and wind; and, in Central Appalachia, cost challenges that make the region’s coal less competitive." Van Nostrand told Ward, “I don’t think the stay will reverse what is happening, but it may slow down the de-carbonizing of the country’s electric supply until the legal issues are resolved." (West Virginia Center on Budget and Policy graphic) 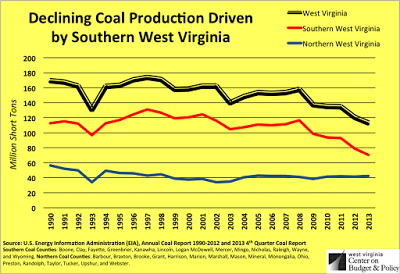 Morgantown environmental consultant Evan Hansen, a candidate for the state House, said the Clean Power Plan "is only one of many factors affecting West Virginia’s mining industry," Ward reports. Hansen told him, “The most important is simple economics—whether coal mined here can compete in the marketplace against coal mined in other parts of the country, natural gas and solar. It’s also a matter of geology, because so many of West Virginia’s thickest and easiest-to-access coal seams have been mined already.” That has helped make Central Appalachian coal the most expensive to mine.

Ten years ago, industry consultant Alan Stagg told the "Covering Coal" seminar of the Institute for Rural Journalism and Community Issues (publisher of The Rural Blog) that depletion of the resource in southern West Virginia had created a situation he'd never seen: production falling while prices and demand rose. After two years of increased production, the downward trend returned, and accelerated.
Written by Tim Mandell Posted at 2/11/2016 09:52:00 AM