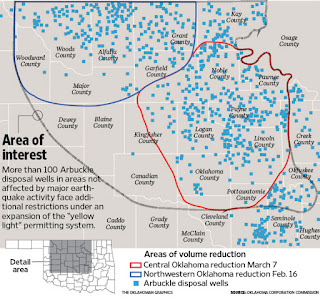 The Oklahoma Corporation Commission released a plan Monday to deal with the state's rise in earthquake activity—linked to the oil and gas industry—in the central part of the state, Paul Monies reports for The Oklahoman. "More than 5,200 square miles of central Oklahoma now will be covered under an expanded plan" that covers more than 400 disposal wells in all or parts of 11 counties. "The plan follows an expanded regional plan for northwestern Oklahoma released Feb. 16. Together, those two plans cover more than 10,000 square miles and more than 640 disposal wells." (Oklahoman graphic)

"Tim Baker, director of the commission's Oil and Gas Conservation Division, said the central Oklahoma plan, like the northwest one, will reduce the total volume of wastewater by 40 percent below the totals from 2014," Monies writes. "The volume reduction plan will be phased in over two months, with full compliance expected by May 28."