W. Post reporter who made fun of rural northern Minn. county about to become its newest resident

A Washington Post reporter who made snarky comments about a rural town being ranked dead last among the nation's most desirable places to live—based on a natural amenities index—is now packing his bags and moving to the town. In August Christopher Ingraham wrote, "The absolute worst place to live in America is (drumroll please) Red Lake County, Minn.." Ingraham changed his tune about Red Lake after residents invited him to visit and he did.

Now, he's moving to Red Lake, drawn by the rural lifestyle. "I couldn't stop thinking about the places in Red Lake County I'd visited, or the people I met there," Ingraham writes. "People who'd shown kindnesses small and large—from a friendly handshake at the bar to an entire cake baked and decorated with cartographic precision as a map of the county—to a stranger who they only knew from a line of snark he'd tossed into a news story." (Star Tribune graphic: Minnesota Sen. Al Franken drew this U.S. map on the back of a Minnesota map for Ingraham) 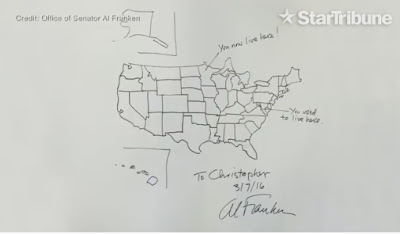 "I kept dreaming about big skies. Broad rivers," Inrgraham writes. "Flat roads running to the horizon and towns that smelled of wood and grain and dry prairie air. ... I commute in to D.C. most days. A one-way trip, involving car, train, metro and a walk takes about 90 minutes on a good day. I count myself among that woebegone 2.62 percent of workers who spend 15 hours or more each week stuck in traffic, shivering on subway platforms, and otherwise squandering a huge chunk of their waking hours on one of their most-hated activities." But he says he can and will do his job, data journalism, from home.

"For me, a 15-hour commute meant a lot of things," he writes. "It meant going on blood pressure medication at the age of 34 because there's no time to exercise. It meant getting to see the kids for maybe 30 minutes on a good night, at the end of the day when we're all tired and ornery. It meant missed opportunities to read, write and think, because it's hard to do justice of any of those things in the calm intervals of a commute involving four modes of transit. And so, I decided, it was time to shake things up." His mom suggested, "What about moving to that nice place you visited over the summer?"
Written by Tim Mandell Posted at 3/10/2016 10:56:00 AM