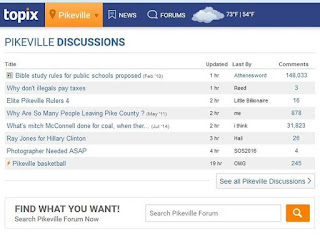 Are anonymous posters on Topix protected by the First Amendment? Should posters be held accountable for slanderous accusations? If so, to what lengths should authorities go to uncover their identities? These are some of the questions that could be answered by the Kentucky Supreme Court in a case being heard this week in which an Eastern Kentucky lawyer and chairman of the airport board has sued two unknown posters who in 2013 called him a thief, embezzler and criminal, Andrew Wolfson reports for the Courier-Journal. The lawyer for the anonymous posters argues that "Topix has 'tremendous value' because critics in a small town can’t afford the repercussions of making their complaints publicly" and that the posters should not be unmasked.

"The case puts in the spotlight an Internet site—Topix.com—that proponents say allows small-town residents to keep local officials honest but others malign as a cesspool of character assassination and a corrosive influence on community life," Wolfson writes. "While the Palo Alto, Calif.-based site has slipped in popularity with the rise of Facebook and Twitter, it still claims to be the country's largest local forum site." Pikeville, Ky., the home of the plaintiff, has become the site's most heavily trafficked single forum, said Topix CEO Chris Tolles. "He said the site—which recently changed its emphasis to entertainment news—was always most popular in what he calls 'feud states,' with Kentucky, which once had 1 million page views a day, the 'highest by a country mile.'”

Al Cross, director of the Institute for Rural Journalism and Community Issues, which publishes The Rural Blog, "said the influence of Topix and similar sites has eroded with the rise of other social media," Wolfson writes. "But given that many newspapers in rural communities lack the resources and the backbone to tackle controversy, Topix sites provide unfiltered, anonymous criticism that can be healthy."

Some courts "have allowed the shield of anonymity to be pierced," including instances in Georgia and Texas where people where Topix was forced to identify users who anonymously people called pedophiles, drug addict or drug dealers, Wolfson writes. But in the Kentucky case, the plaintiff is a public figure. Tolles, who said Topix "supports defamation laws and complies with lawful subpoenas," told Wolfson that “politicians occupy a special place and should have a thicker skin,” especially if anonymous speech alleges “corruption or that they acted like a jerk.” (Read more)
Written by Tim Mandell Posted at 4/28/2016 12:04:00 PM