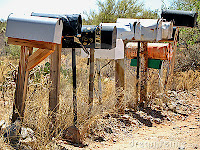 The U.S Postal Service's inspector general has for years considered ways to help save the financially struggling USPS—which lost $5.1 billion in the 2015 fiscal year—while also helping rural areas where service has been threatened, Vauhini Vara reports for The New Yorker.

"David C. Williams, who recently retired after serving as the inspector general for more than twelve years, defined his position expansively, publishing reports on all kinds of things that the postal service could do." Ideas included having mail carriers "deliver groceries, alert social-services agencies when people on their routes need help" and "delivering medicine to elderly people, or even just checking in on them in exchange for a fee. The idea seems particularly useful in rural areas, where health services are scarce."

"Other proposals from the inspector general’s office would take advantage of the postal service’s buildings—for instance, by allowing post offices to provide basic financial services, like cashing checks, keeping savings accounts, and even taking out small loans," Vara writes. "Countries such as Brazil, China, and New Zealand have been doing this for years. Many low-income people, repelled by high fees or generally mistrustful, don’t use banks. And in many parts of the country where executives have decided it’s not worth their while to invest, financial services are simply absent, making them effectively banking deserts. As it happens, nearly sixty per cent of post-office branches are in zip codes where there are either one or no bank branches, according to a white paper on the topic from the inspector general...Thus far, none of the inspector general’s proposals has gained much traction, in part because the USPS doesn’t have the authority to bring them about."
Written by Tim Mandell Posted at 4/25/2016 11:02:00 AM