Many of of the counties—most of them rural—where Donald Trump scored big victories in this year's presidential election could suffer the most if he repeals federal health reform, Philip Bump reports for The Washington Post. That includes large areas of Appalachia, the Rust Belt and the upper Midwest and several longtime blue counties that this year turned red. (Post map: Change in vote margin since 2012) 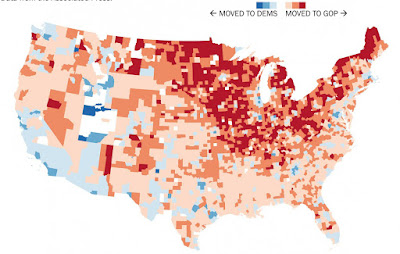 Some of Trump's biggest support was from working-class white voters, a demographic helped greatly by the drop in the uninsured rate from 25 percent to 15 percent since Obamacare was launched, Bump writes. Trump scored victories in many of the states that have seen the biggest drop in rates of uninsured residents—Arkansas, Kentucky, Michigan, Ohio, Pennsylvania and West Virginia, all of which expanded Medicaid under the reform law. Trump has said he supports the longtime Republican goal of returning Medicaid management to the states and limiting federal funding through block grants. (Post map: Change in percent of uninsured from 2013-2016) 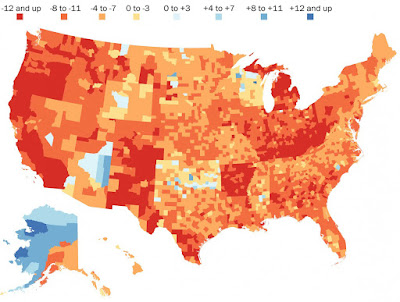 "Nationally, there's no correlation between the change in insurance coverage in a county and the results of the 2016 election," Bump writes. "But it's certainly the case that much of the swath of states around the Great Lakes that went for Trump in 2016 also had big decreases in the number of uninsured since 2013." While it's too early to speculate how Trump's plans will affect newly-insured Americans, "those places that had the biggest changes in coverage are likely to see larger increases in the number of uninsured. In many cases, those shifts will occur in places that voted for it to happen."
Written by Tim Mandell Posted at 12/06/2016 12:22:00 PM