Donald Trump improved the Republican presidential vote "in counties with the highest drug, alcohol and suicide mortality rates," says a study by rural sociologist and demographer Shannon Monnat of Penn State, which compared Trump's vote with that of Mitt Romney in 2012. 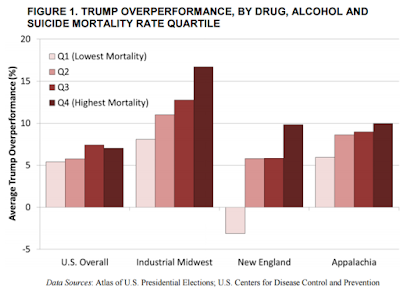 "People often (but not always) turn to pills, syringes, the bottle and other self-destructive behaviors when they lose hope, when they don’t have the means to live comfortably or when they don’t get the dignity that comes from work," writes James Hohmann of The Washington Post, citing counties in Ohio, West Virginia and New Hampshire as examples in the study.

"Alcoholism, overdoses and suicide are symptoms of the deeper social decay that was caused by deindustrialization. This decay led to the fears and anxieties which Trump so effectively capitalized on," Hohmann reports. "I saw this firsthand on the campaign trail all year, in countless interviews with folks who were down in the dumps and struggling to get ahead (or, quite frankly, just get by). Many supported Barack Obama eight years ago because they were desperate for hope and change. They’re still desperate, and now they’re hopeful Trump can bring the change they’re looking for."
Written by Al Cross Posted at 12/09/2016 11:48:00 AM

Precisely the people the Democratic Party of 1933-1972 defended and then dumped.