Millions of Americans, mostly in rural communities, are being exposed to potentially harmful drinking water, Laura Ungar and Mark Nichols report for USA Today. An investigation by the newspaper and its Gannett Co. partners found that "about 100,000 people get their drinking water from utilities that discovered high lead but failed to treat the water to remove it." In some cases, local, state and federal officials were aware of the dangers and many of the utilities "took more than a year to formulate a treatment plan and even longer to begin treatment."

The report also found that about 4 million people "get water from small operators who skipped required tests or did not conduct the tests properly, violating a cornerstone of federal safe drinking water laws," the reporters write. "The testing is required because, without it, utilities, regulators and people drinking the water can't know if it's safe." (USA Today map: Percentage of each state's small water-utility customers who draw water from a system that has failed to properly test for lead since 2010) 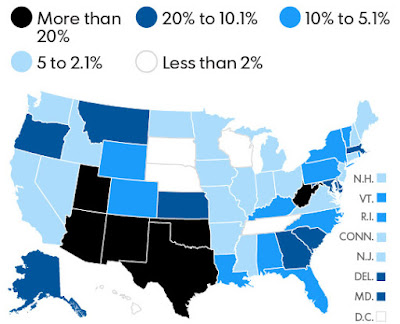 Also, "in more than 2,000 communities, lead tests were skipped more than once," USA Today reports. "Hundreds repeatedly failed to properly test for five or more years. About 850 small water utilities with a documented history of lead contamination—places where state and federal regulators are supposed to pay extra attention—have failed to properly test for lead at least once since 2010."

One problem is that regulators have a history of leniency "with small water systems because they lack resources, deeming some lost causes when they don’t have the money, expertise or motivation to fix problems," the reporters write. "The nation’s Safe Drinking Water Act allows less-trained, often amateur, people to operate tiny water systems even though the risks for people drinking the water are the same."
Written by Tim Mandell Posted at 12/14/2016 11:45:00 AM