Military spouses with occupational licenses struggle to find work after a move, despite state laws

State laws to make it easier for military spouses with occupational licenses to find work after a move still present barriers for job-seekers, Jen Fifield reports for Stateline. A report by the Treasury Department found that 35 percent of military spouses—more than 100,000 people—require licenses or certifications for their professions. A survey by Blue Star Families, a non-profit for more than 150,000 military spouses, found that 63 percent of them encountered licensing problems because of a move. The number was 70 percent in 2014.

"Laws were driven by a White House campaign aimed at decreasing the unemployment rate for military spouses, 92 percent of whom are women," Fifield writes. The unemployment rate for military spouses was 23 percent in 2015, down from 26 percent in 2010, says a report by the U.S. Department of Defense. The rate is high because military families move often, about once every two to three years, says a report by the Institute for Veterans and Military Families at Syracuse University. (Screenshot of Stateline interactive map showing how easy or hard it is for military spouses to get a permanent or temporary occupational license in a new state) 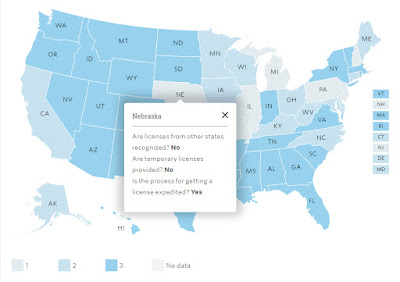 Keeping working military spouses happy is key, because spouses cite employment as a top concern and they "are 36 percent more likely to recommend military service to others if they are able to maintain a career," Fifield writes.

"In 29 states, the law provides for three allowances supported by the Pentagon—recognizing out-of-state licenses, issuing temporary licenses and expediting licensing," Fifield writes. "But even in those states, the laws only include spouses in certain circumstances and certain professions, and the state may not be required to provide the allowances. And in many cases, spouses don’t know the laws exist." (Read more)
Written by Tim Mandell Posted at 12/13/2016 10:28:00 AM