Researchers from the University of Washington and the Erasmus University Medical Center in the Netherlands have charted county-level data for 21 major causes of death in the U.S. from 1980 to 2014. The study, published in The JAMA Network, found that "geographic regions with elevated mortality rates differed among causes." For example, the map below shows that mortality rates from self-harm and interpersonal violence were particularly high in southwestern counties and in Alaska. 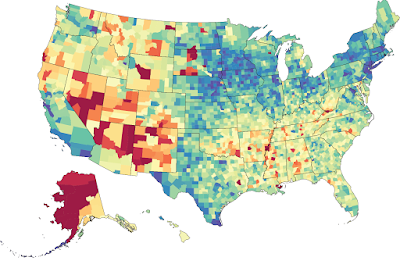 The study includes information on communicable, maternal, neonatal, nutritional and noncommunicable diseases and injuries. Below, a screenshot of the study's interactive map shows where substance-abuse disorders are most prevalent. Leading the way is Rio Arriba County, New Mexico, which is home to the Rio Grande Sun, which has extensively covered the issue, as well as Dakotas counties with large Native American populations and in Central Appalachia. 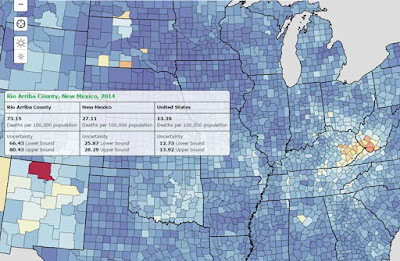