Disability benefits are nearly twice as common in rural areas, and they can deepen a cultural divide

From 1996 to 2015, "the number of working-age adults receiving federal disability payments increased significantly across the country — but nowhere more so than in rural America," The Washington Post reports in the latest piece of a series on "how disability is shaping the culture, economy and politics" of 102 rural counties "where, at minimum, about one in six working-age residents receive either Supplemental Security Income, a program for the disabled poor, or Social Security Disability Insurance for disabled workers. These are places — primarily white, rural and working-class — where once-dominant industries have collapsed or modernized and the number of people who are jobless or receiving public-assistance benefits has soared."

One of those places is Grundy, Va., near where the Old Dominion meets Kentucky and West Virginia, and one of those families is the McGlothlins: a father who became disabled in the coal mines, became addicted to painkillers and is now in jail for selling them; a mother whose disability check isn't enough for her household, which includes her son's fiance; and the son, who got fired from McDonald's for "missing a shift during a snowstorm," then totaled his car and had to drop out of community college, and now begs for money -- following in the footsteps of his father, who was confronted personally and on social media by a neighbor who was offended when the disabled miner wouldn't accept a job offer, Terrence McCoy reports.

McCoy gets into the head of Sheila McGlothlin: "She had wanted something more for him, something other than what she felt most days: shame. She knew how she must look, in her pajamas and mismatched socks, to people who work. She knew what they must say about her disability: It’s only anxiety, only depression. Why couldn’t she work? Why did she buy soda and cigarettes when they needed food? How could she afford the Internet and cable TV bills on a $500 monthly disability check? She would sometimes consider how she would answer. She would say that cigarettes and soda make hard days a little easier. That television is just about her only connection to a world that hasn’t seemed to want her anymore. But it’s simpler to say nothing at all, so she rarely leaves the house now."

Disability has become so prevalent that the federal government will spend more on it this year than food stamps, welfare, housing subsidies and unemployment, combined, and the programs are running out of money, the Post reports. In rural counties, 9.1 percent of working-age people are on disability — nearly twice the urban rate and 40 percent higher than the national average. In Buchanan County, where Grundy is the seat, one in four adults are on SSI or disability, but that doesn't mean it's a broadly popular pursuit. “There is a critical divide in the minds of low-income whites, between people who work, even if they struggle, and what has historically been called ‘white trash’,” University of California, Davis professor Lisa Pruitt, who researches rural poverty and grew up in Newton County, Arkansas, which has one of the nation’s highest disability rates, told McCoy. “The worst thing you can do in rural America among low-income whites is not work.” The a mentality, she told him, is that “only lazy white trash” accept “handouts.” A poll by the Post and the Kaiser Family Foundation confirmed that such feelings are more common in rural areas: 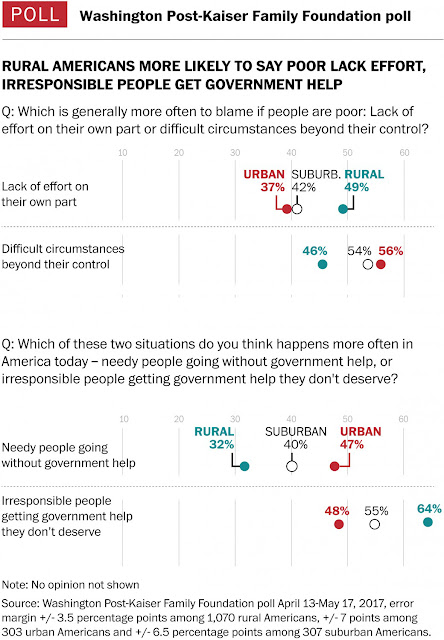