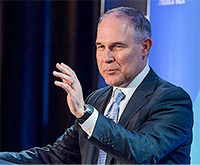 Environmental Protection Agency Administrator Scott Pruitt has announced a program to critique mainstream climate science with pro-and-con debate teams of experts recruited by the Trump administration, a move many see as an effort to undermine the scientific consensus that humans are causing climate change. Pruitt said at a board meeting of the American Coalition for Clean Coal Electricity that he's establishing a "specific process" to review climate science, a senior administration official told Emily Holden of Environment & Energy News.

Coal industry executives believe the move means Pruitt will review a 2009 finding that greenhouse gases emitted by industry, power plants and cars endanger human health and welfare. According to Holden, Pruitt assured Robert Murray, the CEO of Murray Energy Corp., that he will review the endangerment finding within months.

The administration proposes to recruit "the best in the fields which study climate" and will create a process through which the experts can debate back and forth on new reports on climate science. Scientists usually go through a peer review process with new scientific reports, but the administration says that its government-recruited experts can also effectively evaluate new reports, writes Holden.

"Climate science, like other fields of science, is constantly changing. A new, fresh and transparent evaluation is something everyone should support doing," said the administration official.