Several states are attempting to join a legal challenge to the Environmental Protection Agency's decision to keep a widely used pesticide on the market despite evidence it may be harmful.

Massachusetts, Maryland, Vermont, Washington, and the District of Columbia are seeking to join New York in the lawsuit pending in the appeals court in San Francisco, Michael Biesecker reports for The Associated Press. The lawsuit claims EPA Administrator Scott Pruitt violated the law by ending his predecessor's efforts to ban the popular pesticide chlorpyrifos, which has been sold by Dow Chemical since the 1960s and is one of the most widely used pesticides in the U.S. 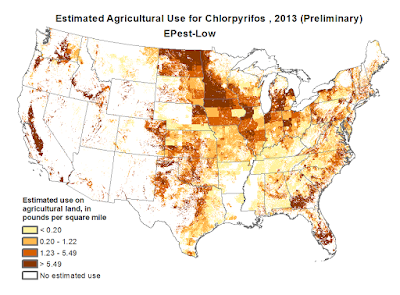 Federal law requires the EPA to make sure that pesticides used on food are not harmful to consumers, but federal scientists reported that chlorpyrifos can damage the brains of fetuses and infants. A 2012 study from the University of California, Berkeley, found detectable levels of chlorpyrifos in 87 percent of newborns' umbilical-cord blood samples tested, reports Biesecker.

In addition to its effects on children, the pesticide is being blamed for causing 47 farmers around Bakersfield, Calif., to get sick on May 5. When the chlorpyrifos-containing pesticide Vulcan was sprayed on an orchard there, the wind caused it to drift over to nearby cabbage harvesters, who then complained of nausea and vomiting.

Some efforts have been made to mitigate the effects of chlorpyrifos. Dow stopped selling it for home insecticide in 2000, and the EPA mandated no-spray zones around schools and other vulnerable areas in 2012, but some advocacy groups such as the Natural Resources Defense Council and the Pesticide Action Network said those efforts are not enough and filed a federal lawsuit seeking a national ban.