Historian laments passing of country stores, where 'you might actually get to know your neighbors'

We started reporting the impact of chain dollar stores on small, rural stores more than a year ago, and the trend seems to have accelerated, with reports recently from New England and Virginia, which noted that Dollar General Corp. has almost as many locations as McDonald's.

The closing of a small store in his neighborhood prompted David Cross, a lawyer and historian in Albany, Ky., to write a piece for the weekly Clinton County News, which he titled "The Little Centers of Commerce and Community." It told of many other stores that have closed in the town of 2,000 and county of 10,000, one of the most rural in the United States. Albany is home to a Dollar General Market, the company's expanded version of its original stores.

"Sadly, the days of the community country store are nearly gone," Cross writes. "There are many factors to the demise of such little places; people are more mobile, the world is on wheels, and there are Dollar General Stores every few miles. We all have memories of our visits to the little country store, where talk was the most important commodity. Let's hope the little stores that remain hang on for a long time; they're not just the closest place to get a soft drink or a loaf of bread, they are also the place where you might actually get to know your neighbors."

Bryce Oates and Tim Marema report for The Daily Yonder, "Rural households are about 25 percent more likely than urban ones to participate in the Supplemental Nutrition Assistance Program (SNAP), rural grocers say the federal nutrition program is an important part of the revenue that keeps their stores in business." Here's a map of SNAP recipient percentages by county (click on it for a larger version): 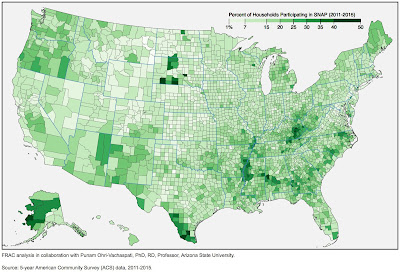