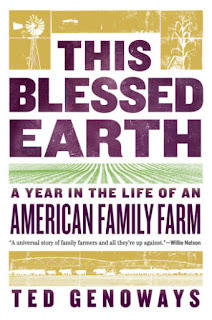 The survival of traditional family farms – those large enough to financially support a family but small enough to be worked and managed almost entirely by family members – has been under pressure for several decades in the U.S.

A new book, This Blessed Earth: A Year in the Life of an American Family Farm, by journalist and poet Ted Genoways, looks at the day-to-day challenges and financial realities of farming that exists on a scale somewhere between huge corporate agriculture and smaller, specialized ventures.

Genoways wanted to explore the world of farmers who are trying to pass on their land and way of life to the next generation while dealing with a range of political and market factors that affect their ability to make a living. Recognizing changes in consumer habits, he asked, "Is all of this really helping family farmers? How do they feel about a food movement that lionizes ideologically-driven operations like Joel Salatin's Polyface Farms, the pastoral curmudgeon made famous in Omnivore's Dilemma, and vilifies generations-old operations in the middle of the country, where many farmers have no choice but to raise commodity grains - principally corn and soybeans - just to keep their families afloat?"

The book follows Nebraska farmers Rick and Heidi Hammond and their daughter, Meghan, who raise corn, soybeans and cattle. The family began farming in Nebraska in the 1860s. "I saw firsthand conversations about what to do at a particular moment on a soybean farm in rural Nebraska that was directly influenced by what was happening at that moment in China," Genoways describes.

Lorraine Boissoneault writes for Smithsonian magazine, "Genoways says farmers follow everything from trade agreements like the Trans-Pacific Partnership to the debate over NAFTA and immigration from Mexico - to which the Mexican government has suggested it might stop imports of American corn."

In the face of these geopolitical issues and more traditional farm challenges, such as harsh weather, field pests and plant diseases, the Hammonds are trying like many other farm families to make a living and preserve their most precious resource: their land.

"He's not your typical 2017 farm hero, but, as Genoways artfully illustrates, [Rick] Hammond is working hard to pass his farm on to the next generation against the odds," Twilight Greenaway writes for Civil Eats. "And the myriad challenges family farms like his face – from unstable prices to a diminishing water supply and increasingly erratic weather – are worth our attention."