How would your state fare under Senate Republicans' last-ditch bill to repeal the Patient Protection and Affordable Care Act, which could pass Congress next week? The Kaiser Family Foundation has some figures, and so does The New York Times. UPDATE, Sept. 21: The Trump administration released its state-by-state estimates. "The predicted loss is less than that forecast by three independent analyses of the bill’s impact in recent days, but the internal numbers show a similar checkerboard of states that would be big winners and equally big losers," The Washington Post reports.

Kaiser says in a Sept. 20 report that the Graham-Cassidy proposal would:
The changes would reward the 15 states, controlled by Republicans, that did not expand Medicaid to people in households with incomes up to 138 percent of the federal poverty threshold. Kaiser explains the complex formula and reduces its effect to a simple chart: 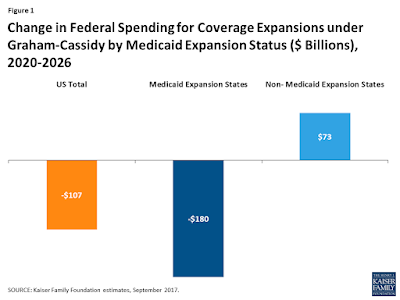 State by state, Kaiser defines the extremes: "Five states would see a reduction in federal funds of 30% or more from 2020 to 2026: New York (-35%), Oregon (-32%), Connecticut (-31%), Vermont (-31%), and Minnesota (-30%). Six states would see at least 40% more in federal funds under the proposal: Tennessee (44%), South Dakota (45%), Georgia (46%), Kansas (61%), Texas (75%), and Mississippi (148%). . . . Because actual state allotments under the block grant may vary based on state-specific factors and the secretary’s authority to further adjust the formula, actual state experiences under the block grant may differ. It is uncertain how additional adjustments would be used to alter states’ allotments up or down."

The New York Times showed the funding changes per person, in charts that were color-coded: first by states that expanded Medicaid (in green), then by states (in orange) with senators who voted against one of the Obamacare repeal bills in July: 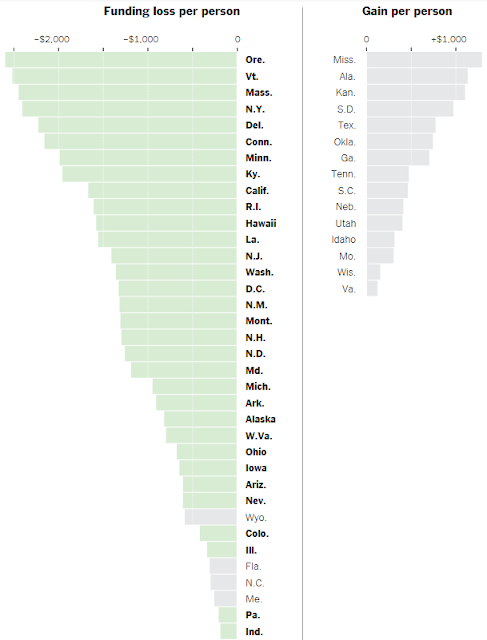 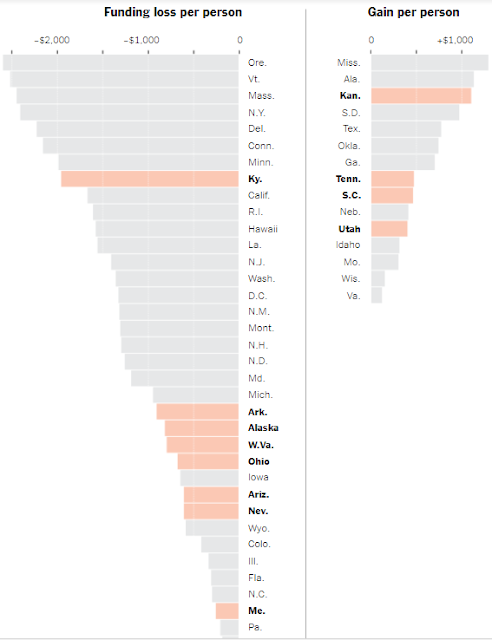