UPDATE, 2:08 p.m.: Arizona Sen. John McCain announced that he would vote against the Graham-Cassidy bill, dealing it "a potentially decisive blow," The Washington Post reports. That puts the focus on Alaska Sen. Lisa Murkowski and Maine Sen. Susan Collins, the other Republicans who voted against the last bill, and Sen. Rand Paul of Kentucky, who voted for it but says he will oppose this one. 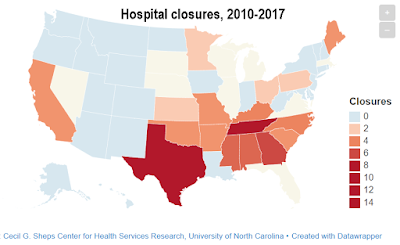 "Leaders of cash-strapped rural hospitals worry that the latest proposal to repeal and replace the Affordable Care Act could destroy them," Dave Barkholz reports for Modern Healthcare. Many rural hospitals are already on the ropes. "Of the nation's 1,160 rural hospitals, 41 percent are operating at a financial loss. Eighty-two have already closed since 2010. And one in three of the survivors is considered at risk of closing," Barkholz reports.

"If you want to watch a rural community die, kill its hospital," Lauren Weber and Andy Miller report for the Huffington Post from three counties in rural Georgia that are struggling to keep their hospitals alive. Georgia is one of the 15 states that did not expand Medicaid under the ACA, which has generally boosted rural hospitals elsewhere. The bill would end the Medicaid expansion in 2020. Because rural areas have far higher rates of Medicaid patients, rural hospitals would be disproportionately hurt and many might have to close. The Daily Yonder reports on an analysis of that by Headwaters Economics, which includes an interactive map showing how much of each county's personal income is Medicaid benefits. Here's a screenshot of the version showing counties at 10 percent or more (click image for larger version): 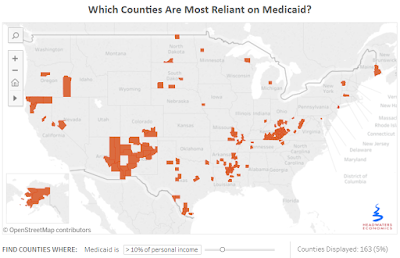 The bill also doesn't address the federal cost-sharing subsidies that help insurers offer cheaper plans for people with low incomes. President Trump has threatened to withhold those payments, sparking concern -- and withdrawal from rural markets -- by many insurers. Maggie Elehwany, vice president of governmental affairs at the National Rural Health Association, said that rural hospitals would be hit especially hard by legislation that "increases the uninsured, boosts deductibles for patients or threatens already shrinking Medicare payments."

Under the Graham-Cassidy bill, the individual and employer insurance mandates would be repealed, states would be given more leeway to change rules, and nearly $1.2 trillion in ACA subsidies would be distributed to states through block grants. "If state block grants end up cutting funding to health care, patients who can afford insurance may end up with higher deductibles, leaving hospitals struggling to collect payments," said Megan Neuberger, team head for health care at Fitch U.S. Corporate Ratings.
Written by Heather Chapman Posted at 9/22/2017 11:50:00 AM