CHIP reauthorization could stall in Congress until December; some states running out of money

It's been 24 days since the federal government let funding lapse for the Children's Health Insurance Program, which provides coverage for 9 million low- and middle-income children, and there's no clear resolution in sight. "This is an unprecedented moment for the CHIP program," Sarah Kliff reports for Vox. " Giving health insurance to low-income children is not controversial. The program has never courted the same controversy that the Affordable Care Act has. Instead, CHIP typically has widespread bipartisan backing among legislators on both sides of the aisle. Bills to expand CHIP typically pass with wide margins."

A congressional aide told Sam Baker of Axios that CHIP funding may not be restored until December because "the House is still fighting over the substance of its bill and floor time in the Senate is limited." The delay is likely to disproportionately hurt rural counties.

Most states have leftover funding to keep their programs running, for varying lengths of time. No children have yet lost coverage, but that's coming soon if the program is not reapproved soon. Five states (California, Arizona, Oregon, Washington, and Minnesota) have already received emergency funding to keep state CHIP plans going through the end of December, Politico reports. They and 26 more states, along with the District of Columbia, will run out of funds by the end of March 2018. All 50 states and D.C. will run out by summer.

The Politico article has a detailed run-down of how the lack of CHIP funding will hurt 13 states in the near future. But in general: "If CHIP funding runs out, many enrollees would be shifted over to Medicaid coverage instead. But roughly 4 million CHIP enrollees live in states whose programs aren’t linked to Medicaid, so those enrollees are at risk of losing coverage. In certain states, pregnant women could also lose benefits."

A Politico map shows when each state is expected to run out of money: 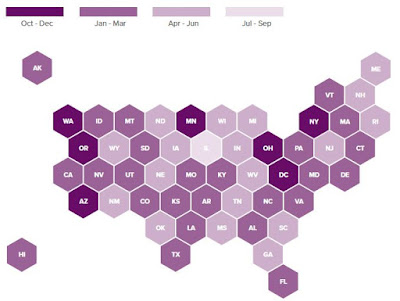