Some 124,000 people who own cabins in Minnesota's lake country, many of whom live in the Twin Cities area, are paying a big share of the property taxes for the scenic vacation area. "In 10 of Minnesota’s 87 counties, they shoulder more than 40 percent of the residential property tax burden, according to data from the state Department of Revenue. And in several counties, they pay more than 50 percent," John Reinan reports for the StarTribune in Minneapolis. But cabin owners "say they often don’t feel like they have much voice in how that tax money is spent. That frustration has prompted many property owners in lake country to question the fairness of a system where counties rely so heavily on taxpayers who live there only a few months of the year."

Local officials in lake country often fail to contact seasonal cabin owners about local plans, such as a controversial lakeshore hotel development approved by the city of Detroit Lakes in 2015. Morrie Lanning, a former state legislator who tried to provide tax relief for cabin owners, told Reinan, "Your voice doesn’t count nearly as much as those who can vote in that jurisdiction." He said cabin owners in Otter Tail County (he's one of them) are particularly irritated that local school officials "kind of sell their [school] bond issues with the argument that a lot of the taxes are going to be paid by people who don’t live here." Here's a screenshot of the StarTrib's interactive map, showing the county with the largest percentage of residential property taxes paid by cabin owners: 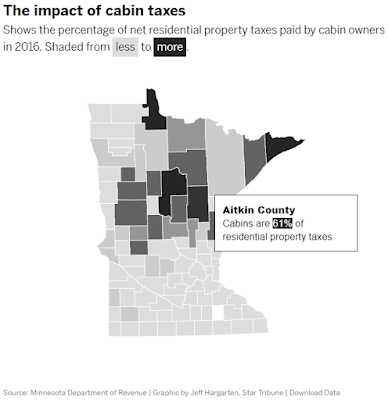