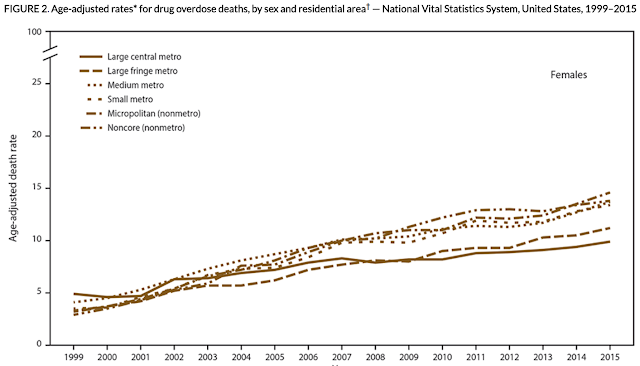 Rates of drug overdose deaths are now higher than in urban areas, due to an increase in the rate among women, according to a report released Oct. 19 by the Centers for Disease Control and Prevention. A chart with the report (click on it to enlarge) shows that among women, those in rural areas once had the lowest overdose-death rate among the six types of population areas, but now have the highest. Among men, those in rural areas had the lowest rate in 2015, just as they did in 1999.

"The drug overdose death rate in rural areas is higher than in urban areas," said CDC Director Brenda Fitzgerald, M.D. “We need to understand why this is happening so that our work with states and communities can help stop illicit drug use and overdose deaths in America."

One possible reason is less availability of naloxone, known by the brand name Narcan, is rural areas. The drug that stops overdoses "is less often administered by emergency medical technicians-basics (persons trained to provide basic-level life support), who are more common in rural areas than paramedics (who can provide advanced life support care)," the report says.
Written by Heather Chapman Posted at 10/23/2017 12:16:00 PM