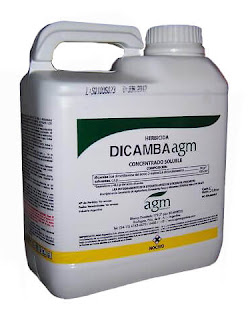 Scientists say a popular weedkiller is a major reason honeybee populations are falling in the U.S. and worldwide.

Dicamba has been used as a herbicide since the 1960s, but in recent years stakeholders have increasingly complained that it tends to drift from where it's sprayed and damage or kill neighboring crops and other plants. That includes the flowering weeds that honeybees love to pollinate, Liza Gross reports for Reveal, a publication of The Center for Investigative Reporting, in conjunction with the Food & Environment Reporting Network.

Several states have banned or restricted use of the herbicide, but the Environmental Protection Agency ruled in October that farmers can use it for the next two years with tighter restrictions. Scientists have warned EPA for years that dicamba would continue to kill bees' food. In 2011, EPA scientists agreed, concluding that increased dicamba use could hurt pollinators. But in 2018 EPA said it expected the decision would not cause any adverse effects for bees or other pollinators.

Dicamba use "appears to be a major factor in large financial losses for beekeepers," Gross reports. "Hive losses don’t affect just the nation’s honey supply: Honeybees pollinate more than $15 billion worth of fruits, nuts and vegetables a year, largely in California. From 2016 to 2017, U.S. honey production dropped 9 percent. Official statistics for 2018 have not been released."

Besides destroying bees' food, dicamba may also be killing them by damaging their gut microbes and hindering their ability to make fat and stay warm during cold weather. Parasites, viruses, climate change and insecticides are other factors that have contributed to colony collapse disorder, which has destroyed between 30 and 90 percent of beekeepers' hives in the past decade, Gross reports.
Written by Heather Chapman Posted at 1/29/2019 11:59:00 AM