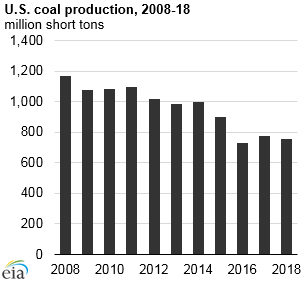 Despite the Trump administration's campaign-promised efforts to help the coal industry, including rollbacks on emissions standards for coal-fired power plants, coal production fell last year, to less than a third of its 2008 level. That corresponds with a rise in production of natural gas and renewable energy, according to fresh data from the U.S. Energy Information Administration.

"Annual production last year dropped by 2.5 percent to 755 million short tons, lower than at any point during what critics decried as the Obama administration's 'war on coal' except for 2016, when production hovered around 725 million short tons," Alan Neuhauser reports for U.S. News and World Report. More than half the 530 coal-fired power units in the U.S. have been shuttered or scheduled for retirement since 2002, and most have been replaced by natural-gas units or, to a lesser extent, renewable energy.

The EIA "projects that U.S. coal consumption will decline 4 percent this year to 691 million short tons. This will be down 44 percent since coal’s peak usage in 2007, and the lowest amount since 1979," Chuck Jones reports for Forbes.