Rural people with disabilities are still struggling to recover from the Great Recession, researchers find

It's well known that rural areas have been slower to recover from the Great Recession than urban areas, but University of Montana researchers have identified another demographic still struggling: people with disabilities, especially those in rural areas.

The researchers, who work for the university's Research and Training Center on Disability in Rural Communities, analyzed data from the Census Bureau's latest American Community Survey, which was released in December with 2013-17 data, compared to data from the 2008-2012 edition. They included people with sensory, physical and mental disabilities. 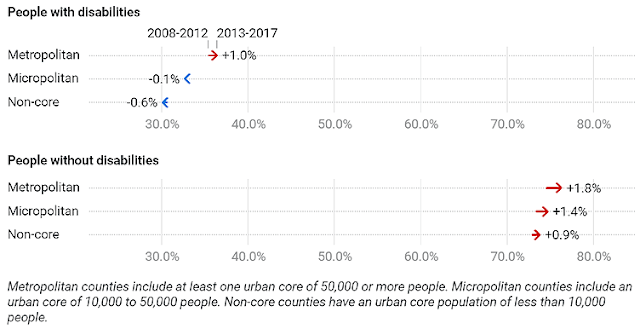 Employment rates among people with disabilities varied widely in different parts of the country; those in New England, West South Central, Mountain, and Pacific states (as defined by the Census Bureau) had a particularly hard time finding employment. Those lower employment rates mean the rural disabled have less access to health insurance, retirement benefits and other financial resources, the researchers report.
Written by Heather Chapman Posted at 1/31/2019 12:00:00 PM