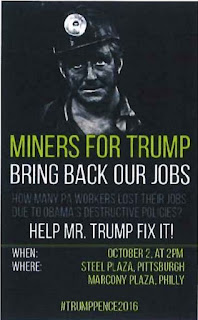 The Mueller report revealed widespread attempts by Russians to help President Trump win the 2016 election, and included examples of their social media posts and posters. One such example stood out to retired West Virginia coal miner Ronnie Hipshire: on page 31 of the Mueller report was a photo of his father Lee Hipshire on a poster advertising a pro-Trump rally, Sacha Pfeiffer and Wynee Davis report for NPR. The rally, and poster, were purported to be created by a group called Miners for Trump.

"In the photo taken by photographer Earl Dotter, Lee is seen after what Hipshire says was 'a hard day's work' as he emerges from a mine in Logan County, W.Va. His shift had ended, and the grit of his mining work covered his face. It's a striking image, but one that Hipshire says his father would not have wanted used to support President Trump," Pfeiffer and Davis report.

That's because Lee Hipshire was a staunch Democrat who died of complications from black-lung disease, and "never would have even thought about putting his face on something like that," Hipshire told NPR. He said he's frustrated, but doesn't know how anyone could stop bad actors from stealing such images. "I don't know what you would do to keep them from doing it . . . How could you block the Internet down?"
Written by Heather Chapman Posted at 4/23/2019 11:21:00 AM