Three 'Culture of Health' prize winners are rural; in at least one, the local newspaper did its job and helped out 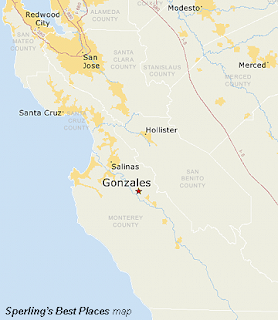 About 94 percent of Gonzales, a Salinas Valley town of about 8,400, is Latinx (most of them farm workers), and over a third of the residents are under 18. "Young residents are seen as an asset and empowered to act on their ideas. Voters supported this focus on youth when they approved a half-cent sales tax in 2014 to pay for activities like after-school programs and summer camp; improvements in parks and recreational places; and summertime career training," the RWJF website says. "The money also funds mini-grants of up to $5,000 that allow residents to suggest ideas and lead projects that will improve the town’s quality of life—small but important steps, such as upgrading a food pantry or adding new hydration stations for filling water bottles at schools."


Sitka, a town of 8,647, is spread among 4,811 square miles on a chain of islands in Alaska's Panhandle. "Isolated and bound together by geography, the community has recognized that the only way to ensure better health for all is to move forward collectively, across cultures and sectors," RWJF says. "To that end, a dozen years ago, partners formed the Sitka Health Summit. They came from local nonprofits and the community’s two health care providers—Southeast Alaska Regional Health Consortium, the region’s tribal health organization, and city-owned Sitka Community Hospital—which merged this year." The Sitka Health Summit has proved effective in addressing the community's health needs and empowering local citizens to be part of the process, RWJF reports.

Lake County and Leadville, its only incorporated town, make up a former mining community where residents have been working hard to turn the economy around over the past decade. In 2010, the county got a wake-up call when an annual statewide survey noted that children and teens in the county were likely to have poor health outcomes. "For two years, county government, local nonprofits, and youth worked to create a plan of action for improving young people’s well-being and futures," RWJF reports. "Released in 2013, it set goals for boosting academic achievement and post-secondary training, reducing substance abuse and teen pregnancy, improving access to parks and volunteer opportunities, and strengthening economic opportunity. Today, the efforts set in motion by that plan are paying off. Teen birth rates have dropped. The percentage of teens who report being physically active and eating breakfast every day have increased. More high schoolers are taking classes for college credit."

In 2016, the city and county won a grant from Great Outdoors Colorado, a state agency. "We received $3 million, the most awarded to one community," Marcia Martinek, editor of the weekly Leadville Herald Democrat, told The Rural Blog in an email. "Agencies in the community, with the help of kids and parents, started Get Outdoors Leadville!, which focused on getting youngsters out to recreate in Lake County. This was the start of many initiatives focused on health. As a newspaper we cover all the GOL activities to the utmost. Nothing cuter than a three-year-old in itty bitty skis on the ski slope. We aren't the richest community, but people are hard at work breaking down barriers to outdoor recreation. For example, I was just reading about the gear library which started last year and provides items such as skis, ski boots, snowboards, mountain bikes and fat-tire bikes for the use of kids who can't afford this kind of equipment. In the summer, older kids act as counselors for a GOL day camp for younger kids where they climb 14ers [peaks of 14,000 feet or more], fish, build trails -- all the outdoor stuff. And, no cell phones allowed. We will soon be doing a three-year update on Get Outdoors Leadville! So we've really supported these initiatives, but basically that's just doing our job."