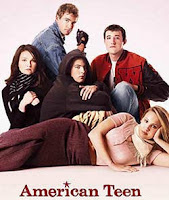 A documentary about five high-school seniors in a small Indiana town, which created a stir at the Sundance Film Festival last winter, is again getting favorable attention. The Web site of Mother Jones magazine has a review of "American Teen," produced in Warsaw, a town of 12,000 in Kosciusko County, pop. 50,000, between Fort Wayne and South Bend.

"Though they fill somewhat stereotypical roles, the teens most likely weren’t exaggerating for the camera—film crews followed about 15 kids for the whole year, and the chosen five didn’t know they were the stars until the night before the premiere," write Kiera Butler, Casey Miner and Gary Moskowitz, who attended a sneak preview last night and "couldn't shut up about it." David Slone of the Times-Union in Warsaw wrote in January that four students were featured, but the final "cut" apparently added one; the movie poster (above) shows five.

Miner writes that director Nanette Burstein appeared to give the students "a lot of personal attention. None of their parents seemed really emotionally supportive. Often their friends were unavailable, and the teachers and counselors at school were horrifying. To have a sympathetic adult who's literally made it her job to care about every tiny event that happens in your life—that has to make a difference." (Read more) The movie is scheduled for release early next month.
Written by Al Cross Posted at 7/21/2008 04:02:00 PM