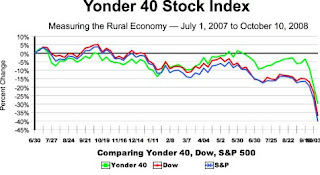 After a disastrous week in the stock market, the Daily Yonder reports that its index of rural-oriented stocks, the Yonder 40, fared better than both the Dow and the S&P. Since July 2007 the Dow dropped 37 percent, the S&P 40 percent, while the Yonder's lost only 30 percent. While not exactly good news, it suggests that rural-oriented firms have fared slightly better in the economic crisis. (Yonder chart)

The Yonder created the index to serve as a barometer of the rural economy. The stocks are made up of publicly traded companies that "do much of their business in rural America," it explains. All but two of the stocks dropped last week. Tractor Supply and Plum Creek Timber both made modest gains but, writes the Yonder's Bill Bishop, "For the rest of the 40, the news was mostly grim, as prices dropped in the face of good news and bad." For example, "Family Dollar Stores reported that its fiscal fourth-quarter net income rose 41 percent on strong sales, likely spurred by government stimulus checks," but the stock still dropped 9 percent last week. Frontier Communications was down 27 percent, DirecTV Group lost 21 percent and Fleetwood Enterprises Inc. sank 29 percent. (Read more)
Written by AWM Posted at 10/14/2008 09:12:00 AM