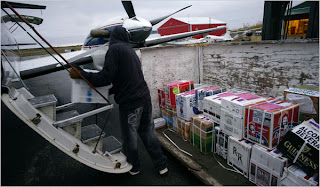 In much of rural Alaska the sale of alcohol is illegal. Many of these places are dominated by native people whose culture did not include alcohol until whites brought it. (Angel Franco photo of liquor being taken from a plane)