Annie Proulx, journalist turned writer of the rural West, is moving from Wyoming to New Mexico 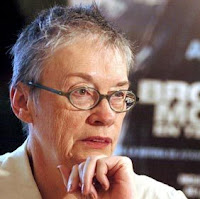 Annie Proulx, who "has often criticized the literary establishment for knowing nothing about what goes on in America outside its cities," is leaving southern Wyoming and the landscape that inspired her short story-turned-movie, Brokeback Mountain, which she now says she wishes she had never written.

"I moved to Wyoming for the long sightlines and the walkability, but I've had enough," she told Susan Salter Reynolds of the Los Angeles Times. Her reasons are not explicitly stated, but Reynolds reports, "The road into the house, though beautiful, turns to mush for much of the year -- weather prevents mail and visitors, and Proulx, 73, worries about emergencies. She lives alone, with no hired help ... " Reynolds suggests that Proulx's leaving has little or nothing to do with her story's subject, homosexuality among cowboys, saying that people in the town of Saratoga, population 1,700, know about the story, but no one there knows Proulx -- which we doubt. (Los Angeles Times map)

Proulx told Reynolds that she wishes she had never written the story because she has been inundated by manuscripts, screenplays and letters from men who rewrite or serialize it and tell her "I'm not gay, but . . . ' They think that just because they are men, they understand men better than I do," Proulx said. The story, she says, "was about homophobia in a place." It was part of a Close Range, the second in what Reynolds calls "an astringent triptych of Wyoming story collections," beginning with Bad Dirt and concluding with Fine Just the Way It Is, recently published. Bad Dirt, published when Proulx was 53, "was a backhand swipe at the mythology of the West -- the old beliefs that aren't really true, like the idea that there are no homosexuals in Wyoming," she told Reynolds. "Everyone here is playing some role: the brave pioneer woman, the cowboy."

Proulx started her career as a journalist, writing for the outdoor magazine Gray's Journal, and as a novelist follows the journalistic approach of the French Annales School, "which involves looking carefully at documents, receipts, census reports, recipes -- any record of daily life," Reynolds reports. She uses this -- although not, she says, the actual characters -- along with bits of dialogue picked up in bars and restaurants. Her life is a whirlwind of bits of paper, notes on envelopes, notebooks that cohere, tornado-style, into her tight, unsentimental stories. For this, she needs time and isolation, so her anonymity in Saratoga is a good thing. But there is a larger problem. Writers, especially famous ones, do not make good neighbors in the warm and fuzzy sense. Locals don't always appreciate seeing themselves in fiction's wobbly mirror." Her next destination is Albuquerque.

For journalists contemplating novels, Proulx has some implied technical advice: In writing, she uses a computer ("the enemy of careful writing") only as "a joinery device," assembling and revising handwritten material. She told Reynolds, "There's something about the rhythm of writing on the page with a pen that is richly fulfilling -- like drawing a picture." (Read more)
Written by Al Cross Posted at 10/18/2008 03:41:00 PM

I started as a reporter covering a town of 1,200 for a daily. First thing I learned? If I wrote about somebody, I was sure to run into them that day or the next. It kept me honest and accurate. Now I'm the editor in chief of a newspaper covering rural Northern New Mexico. The rule still applies. I also write fiction. Listening carefully to people for so long helps me create real conversations. The trick was learning to write fuller. You have to know that Annie Proulx's keen observations were sharpened when she worked as a journalist.