Only three of Virginia's 92 counties have no zoning, but zoning is countywide in 88 counties, not 89. The outlier is Franklin County, along the east side of the Blue Ridge south of Roanoke, where four of the districts are zoned and the other three are not, under a "gentlemen's agreement" that was "based at least in part on which politicians liked zoning and which ones saw it as governmental intrusion" when the county adopted land-use planning more than 20 years ago, reports Janelle Rucker of The Roanoke Times. Now, as increased development makes the seven county supervisors think about revamping their land-use plan, they are talking again about zoning the three "rural and more topographically challenging districts," Rucker writes.

"Re-examining the zoning ordinances is typical in many communities," Rucker writes after interviewing Neil Holthouser, the director of planning and community development. "It's a way of seeing if the ordinances are still working the way they're supposed to and if there are new needs that require changes, Holthouser said. But anytime the county wades back into a zoning discussion, it's hard to ignore the fact that some Franklin County residents must adhere to zoning regulations and others do not." 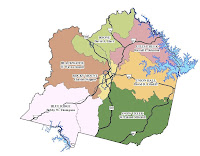 Leland Mitchell, whose Snow Creek District (dark green on map; click to enlarge) isn't zoned, told Rucker, "Before we get countywide zoning, we need to get what is zoned under control." The other non-zoned disricts are Blue Ridge and Blackwater, on the west side.

Zoning is one of the most controversial subjects local officials can handle. Rucker's story is a good glimpse of how one county is dealing with it, and with an unusual situation. To read it, click here.
Written by Al Cross Posted at 2/01/2009 04:51:00 PM

Which of the three counties in VA are not zoned? (Assuming nothing has changed since the writing of this blog.)