As the deadline of The Crittenden Press coincided with a massive ice storm in Western Kentucky in the last week of January, Editor and Publisher Chris Evans knew the edition would be overtaken by events. Recalling an ice storm the previous winter, a one-column headline on the front page announced "Deja vu". But as all of Crittenden County, including the Marion radio station WMJL, lost power, last winter's experience helped the newspaper become the sole source of local information at a critical time. 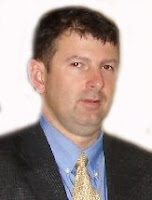 Evans, left, got a generator and enough power to publish an 8½-by-11-inch handbill that was inserted into the paper, and distributed around town even before the paper arrived. It gave critical updates on a host of critical subjects. Because there was no Internet access to update the paper's Web site, Evans called reports to Matthew T. Patton, a local native who lives in Philadelphia and writes a column for the paper. "People were sending him pictures and he would post them online," Evans said. "He was running our Web site ... and you would never know he wasn’t right in the middle of it."

Readers appreciated the efforts. "We got tremendous feedback" about the Web site and handbill, Evans said. "I had people drive by the office, honk their horn and give thumbs up. It's times like this that really give me a charge and makes me love my job." That showed in this week's paper, which you can download here. And what about next week's paper? Evans said he is planning a special section with "the Git-er-done Awards for individuals and entities who need a slap on the back or a tip of the hat." He probably won't include himself, but we will, right here. For a full story, click here.
Written by Al Cross Posted at 2/06/2009 05:39:00 PM