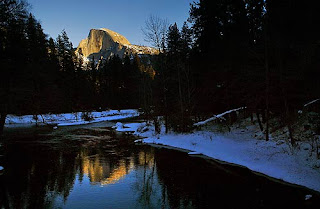 In 1933, when the U.S. was struggling through the Great Depression, President Franklin D. Roosevelt created the Civilian Conservation Corps. It was designed to put young men to work on infrastructure projects in the national park system. Now "some in Congress and elsewhere are reaching back to embrace Roosevelt's Depression-era strategy by calling for a similar parks restoration program to be included in President Obama's economic stimulus plan," reports Julie Cart of the Los Angeles Times. "The House version of the bill has $2.25 billion earmarked for projects in parks." The Senate version of the bill is being debated and a vote is expected soon. (Times photo)

There are a considerable number of "shovel-ready projects" in the nation's 391 parks. In fact, there is a maintenance backlog of more than $8.7 billion. Cart writes,"Investing stimulus funds in parks would create about 50,000 jobs." The National Parks Conservation Association studied the economic impact of parks, particularly in rural areas, finding that every dollar spent at a park generates $4 in benefit, Cart reports. (Read more)
Written by AWM Posted at 2/02/2009 10:51:00 AM