Haggard back on concert trail after lung cancer 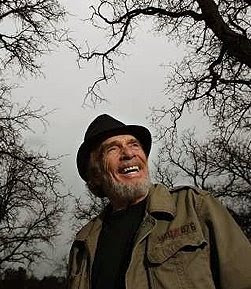 Merle Haggard is getting back to business after battling lung cancer, and the Los Angeles Times profiled the "Okie from Muskogee" as the country music legend prepares to get back to performing concerts. Haggard, diagnosed last year, says he's cancer-free after November surgery. "I got real lucky, I tell you," he says. "They got in there, they got it all, and there wasn't nothin' else in there . . . I didn't have to do no chemo, no radiation, I just had to heal up. How lucky can you get?"

With more than 100 singles to his name, "Haggard's good stuff has included resonant portraits of people struggling to make a living, to do the right thing, or to live with the consequences when they've failed," messages that resonate especially clearly in this economy, writes Randy Lewis. And the singer, who has covered a number of political issues over the years, says that while he didn't vote for President Obama he doesn't miss the significance of his election. "We're probably guilty of living up to the Constitution for the first time in the history of America, which is really something to say," Haggard said.

Haggard moved to California in the 1970s, in order to get away from Nashville life. He lives on a remote homestead with his wife, Teresa, and their two teenaged children. Lewis notes that while he was at the musician's home, Teresa was out on a tractor, plowing for a vegetable and fruit garden. Haggard's dream is to put solar energy panels on 100 acres of his land. "We could generate enough to power about 700 homes. What better thing could you do with your land than that?" (Read more)
Written by Jen Green Posted at 2/02/2009 11:24:00 AM